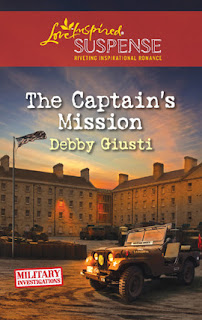 If you like a lot of romance in your suspense stories, The Captain’sMission” is made to order!  The story is a suspense-thriller because the bad guys are trying to kill to hero and heroine. It’s a mystery because the heroine, Kelly McQueen, is a CID special agent assigned to find out who the killer is. And it’s a great love story because Debby Giusti does a masterful job of showing the hero and heroine fall in love, step-by-step and little-by-little when falling in love is the last thing either one of them wants to do.  I find this both usual and welcome in a suspense story.
Being a suspense story, the action never lags. There are enough suspects to keep the mystery interesting and , of course, this is a very authentic military romance by an author from a military family.
Story set-up:
I love military stories. As a former air policeman, I particularly like the CID theme of this story. For those without a military background here's something the reader should know to make the story more enriching:
The heroine, Kelly, McQueen, is a warrant officer, special agent, for the CID. That’s the criminal investigation division. Kelly is like a civilian gold shield detective. A warrant officer in the Army is a specialist or expert who will probably stay in the same field for her  entire career. Helicopter pilots and CID agents are usually warrant officers. A warrant office ranks higher than the highest enlisted man but lower than the lowest commissioned officer. (For example:  a second lieutenant). While warrant officers have uniforms, the CID special agents often wear civilian clothes on the job.
The hero, Phil Thibodeaux, is a Captain who ranks higher than a 2nd and 1st Lieutenant but no other commissioned officers.
The hero outranks the heroine.The heroine usually wears civilian clothes. While  hero is called “Captain”, Kelly is called “Special Agent”.  All Warrant officers above the rank of W1 are called Chief.
The Story:
The location is the same as the first book, “The Officer's Secret", Fort Rickman in south Georgia. The hero is just back from a tour of duty in Afghanistan with his company. It was a successful tour of duty in which none of his men were killed. The hero drives his men very hard and at the end of a many day exercise he conducts a  dangerous live fire exercise in which a man is killed. As company commander, Phil is most likely going to be blamed for the accident if it was an accident. He was in charge and he may have drove his men too hard.
The CID Special Agent called in to investigate what happened is the heroine Kelly McQueen (also called the Ice McQueen by the men). The Post Commander wants the situation cleared up ASAP. The possibility that it was not an accident is not welcome because it will slow the investigation down and keep the bad publicity in the newspapers for months. Kelly could be Phil's worse enemy! This is the perfect situation for a fiery and dangerous romance.
"The Captain's Mission -- 5-Star Romantic Suspense!"
Be Sure to Read Book 1 --"The Officer's Secret" -- One of the Best Romantic Suspense Mysteries Ever!
Posted by Vince at 5:11 PM