"No Other"...Like No Other Christian Fiction I've Ever Read! 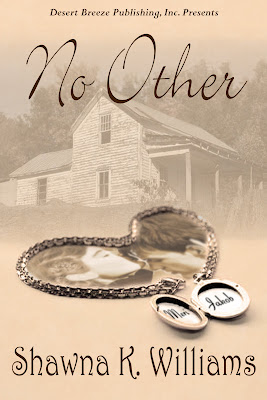 
Discussing "No Other" would provide a very profound subject for a Bible Study group. How many romances are modeled after Adam and Eve? How many romances have happy endings that can be interpreted as both happy and unhappy? Indeed, how many debut novels are written with such power? "No Other" is well worth reading but expect the unusual.

The heroine, Meri Parker, is a perfect Eve. She has been sheltered and pampered in a material paradise all her life. She is young, beautiful, and intelligent. She has been given everything she's ever wanted by her rich parents: a college education, a new car (she didn't even ask for), and when she wants more freedom, her parents buy her a house of her own. Her parents even provided her with a perfect husband who is rich, handsome, and who is fully prepared to provide for her in the manner she has been accustomed to-- for the rest of her life.

All Meri is asked to do is honor her father's wishes. But like Eve, Meri wants to taste real freedom and that means she must partake of the forbidden fruit. This is not so easy, however, as the 'fruit' is not so willing to be picked.

What is the True HEA?

If the hero, Jakob, acquires a beautiful, high-maintenance, princess, who has not only been to the Promised Land but who has spent most of her life living there, could he possibly make her happy? Should he even try? If Meri is successful in capturing the hero's heart will she regret her paradise lost when the bills come due and she goes without for the first time ever? This may be putting too much weight on the shoulders of a romance but this is a very serious romance. This book could easily keep a Bible Study group busy for a long time.

"No Other" possesses a quality I highly prize in historical fiction: 'historical necessity'.

"Historical necessity" happens when a story could only have taken place within the novel's historical time period. By doing this, the 'history' becomes part of the story's DNA. I like history to be necessary and not just wallpaper serving only as atmosphere.

"No Other" at No Other Time

"No Other" could only have taken place just after WWII. While history records that over 11,000 persons of German ancestry were interred by the end of the war, most Americans know nothing about this episode in US history. Most Americans have only heard about the Japanese interments on the West Coast. This makes for an interesting story offering the reader a vivid glimpse of these traumatic events. The view is up-close and personal and may make some readers mad. Injustice elicits strong emotions.

History in the Details

As a history buff, I appreciated all the research and little details that make "No Other" a joy to read. I had to smile when the hero, Jakob, called his Frigidaire an 'ice box'. When I was young, everyone called refrigerators 'ice boxes'--even though most of us had never even seen an ice box.

A Witness to the Times

I was growing up during the story's time span and I can attest that all the little details are consistent with my memories. I did have a minor shock, however, because one event in the story, which would have worried me sick for weeks, went little noticed by the characters-- just as it would likely go unnoticed today. Older readers should spot this event immediately.

For a debut novel, the writing in "No Other" is especially powerful. From the start the reader is hit with one highly emotional situation after another. These emotions arise quickly, full blown, with a high degree of energy.

Power in the POV

"No Other" also has another source of power. By the halfway point of the book, it occurred to me that the story was reading more like it was written in the first person POV rather than the third person.

The story has the 'in your face' immediacy of the first person POV. I think this perception results from strong emotional situations combined with a no-nonsense, straight-forward, prose style. Don't look for flowery descriptive passages in "No Other". You won't find them.

I believe "No Other" presents a strong argument in favor of ePublishing and for reading novels that are only available as eBooks.

As much as I like "No Other", I'm not sure where the story would find a home among traditional Christian publishers. The time period and subject matter may not be in large demand. Also having a heroine who is a high school teacher and a little older than the hero who just happens be a student in her English class – this is atypical. I've read no other romance like this. Furthermore, while the story incorporates Scripture as an essential part of the plot, I would have to define the story as adult Christian fiction.

The story takes place in Texas just after WWII. The hero's family are German Americans who, while well respected before the war, were thought to be NAZI spies after the war started. Some of the family was interred and some were let go. The family's property was confiscated, without compensation, while the young hero, Jakob, was left to support his younger brothers and sisters. After the war Jakob is required to finish his last year of high school so he can get into college. His teacher is the heroine. She is older, rich, and a college graduate. It is also totally inappropriate for her to date the hero. He is truly the forbidden fruit. The rest is history.

"No Other" – Highest Recommendation as Adult Christian Fiction!
Posted by Vince at 11:14 AM No comments:

All the Enjoyment of a Romantic Comedy
-- a Heartwarming Christian Message
Plus a Dash of Irony!

A Refreshing ‘Change of Pace’ Romance

If you enjoy romantic comedies at the movies like, “Sleepless in Seattle” and “You Got Mail”, you just may love “Romance by the Book”. Myra Johnson’s new book features all the cute comedic elements that you’d expect in a successful film!

The heroine, Sailor Kern, is a pixie-cute but clueless, loveable and innocent, very shy, thirty-something water aerobics instructor. The hero, Parker Travis, is a handsome, church going, solid citizen who is considered to be the best hairdresser in Brikenstock. Parker however is very shy, so while he is in his late thirties he hasn't had a date since high school! Ironically he is still considered the most eligible bachelor in his Missouri town. Oh yes, there’s enough irony and interesting antics to eliminate any risk of comedic anemia.

The heroine has a best friend, Kathy, who pretends to date the hero to make the heroine jealous in order to save her from herself. (Got it?) The villain is a charming pseudo-romance author who uses his romance knowledge to exploit innocent young ladies. Did I mention irony?

Who Really Wrote This?

I had to wonder, “Is this the same Myra Johnson who wrote the two very serious and realistic novels, One Imperfect Christmas and Autumn Rains? I did my research and rest assured, she is the same Myra Johnson. (Her picture was in the front of the book.) Besides, unlike Hollywood romantic comedies, Romance by the Book has a serious Christian side which makes the story both unique and rewarding to read.

Christian Values with a Smile!

The Christian values expressed in Romance by the Book involve ‘not judging a book by the cover’ and the wondrous power of spiritual renewal. Don’t worry: there is no preaching. All this is worked into the plot and is part of the reading enjoyment.

Be Prepared to Be Surprised

By the time I finished half the book, I was certain I knew exactly how the book was going to end. I just knew I had everything figured out. Then everything changed! I actually had everything wrong.

Even a Surprise HEA!

While the happy ending was everything I like in a romance, the Epilogue surprised me even more by doubling the emotional impact of the HEA.

I Hope there’s a Sequel

The hero and heroine are exactly right for each other in Romance by the Book, but I really fell in love with Kathy the heroine’s best friend: the librarian. (Of course, I love books.) I hope Kathy gets a story of her own because she’s level-headed, intelligent, loyal, and oh so loveable (even though she has to watch her diet.) Did I mention that Sailor is a health food nut? Believe me, you just have to read it!