How to Write a Great “Hidden-Child” Romance! 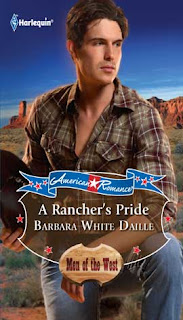 Why “A Rancher’s Pride” Is Getting Universal Great Reviews!


"A Rancher's Pride" has enjoyed the highest book reviews. RT gave it 4 1/2 starts, Top Pick, and I've never seen them give 5 stars. (I think they give 5 Stars once every ten years). "A Rancher's Pride" is about as good a 'hidden-child' romance as you'll ever read.

In this review I'd like to go into how Barbara White Daille did it.


First, "A Rancher's Pride" starts with the hero discovering he has a child. Often you have to wait two chapters for the hero to make this discovery. It’s almost as if the editor just cut off the first two chapters to get right to the action.

“The minute Sam Robertson saw his mother's frozen expression, he knew something terrible had happened. He hadn't seen that look on Sharleen's face since the night his daddy died.”

After this I was hooked. But things didn’t let up. Often when the hero finds out he has a ‘hidden-child’, the hero and heroine begin to try and solve their conflicts. Not this book!

In “A Rancher’s Pride” the conflict grows like a snowball rolling down a hill! I was ¼ into the book and the conflict was still growing. This makes for the kind of intense reading that most fans like in a romance. Here’s what the author said about writing this story:

“Writing ‘A Rancher’s Pride’ kept me on the verge of tears, because even I wasn’t sure how Sam, Kayla and Becky could ever reach a happy ending.”

Well, yes, if the author keeps increasing the conflict instead of working it out, after a while, the reader will wonder too!

This is just wonderful writing! The kind of writing that is very hard to do but the kind that fans love most!

The hero, Sam Robertson, lives on a ranch in New Mexico. The heroine, Kayla Ward, is the aunt of the hidden child who wants custody. The child, Becky, is deaf and Kayla is an American Sign Language teacher. She can communicate with Becky but her father, Sam, is totally lost.

“A Rancher’s Pride” is a very well motivated story that will grab your heart while ringing true to the last sentence. Don’t miss it!