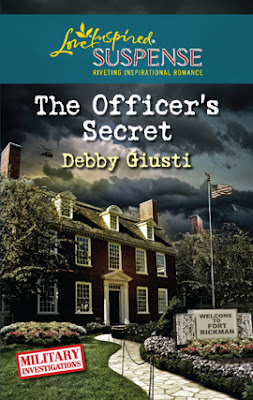 "The Officer’s Secret" Is Enough to Make Me a Suspense Fan!
"The Officer’s Secret"
Debby Giusti
Miniseries: Military Investigations
Category: Inspirational Romance
I can say this with enthusiasm because ‘The Officer’s Secret” is outstanding on three different levels: it’s an intriguing mystery, a breathtaking suspense story and a compelling romance. This is very unusual because normally there is not enough time in a suspense story to develop a satisfying romance. (Love Inspired Suspense Romances tend to be short format and take place over a few days.)  In a suspense story the suspense normally get center stage. Moreover, there often is not a mystery to solve in a suspense. The 'suspense' is involves whether the hero and heroine will survive the threat that is causing the suspense.

“The Officer’s Secret” is a very good suspense story because there is the constant threat of death right up to the last page. To add even more suspense, the heroine’s dead sister warned her not to trust any of the authorities including the military police. Even the weather threatens to kill the hero and heroine! This story is about as suspenseful as a suspense gets!


The mystery is so intricate and well plotted, with ample red herrings and logical twists and turns, that I doubt even hardened mystery fans will figure out ‘who done it’. I’m good at solving mysteries and I couldn’t do it. The romance also works well because both the hero and heroine are at turning points in their lives and both have suffered similar traumatic experiences. The hero and heroine are ideally suited for each other and it is enjoyable to watch them come to this realization in the story given all the trust issues and secrets they have. How could they fall in love in a few days? Because they are perfect for each other.


The heroine, Maggie Bennett, finds her sister, a major in the Army, dead in the sister's attic -- an apparent suicide. Before she died she called her sister to come to the Army post and help her out of some problem. She was also told not to trust the authorities.


The hero, Nate Patterson, is a militarily policeman in the CID, criminal investigations division. Everyone seems convinced the sister’s death was a suicide. All evidence leans that way. However, Maggie is convinced it was murder and she tries her best to get Nate to investigate it as a murder. There's a problem however, since Maggie cannot trust the military police (who might be involved in a smuggling cover-up), she can’t give Nate all her reasons for believing it might not be a suicide. Because Nate suspects that Maggie is holding back information, he has trust issues with her as well. If she is innocent why is she holding back information? Could Maggie be involved in the killing?


Of course, if it is not a suicide, then there are murders out there with good reason to kill anyone who might try and show the death was a murder. This puts both the hero and heroine under constant danger of death.


This is the first book in the author’s “Military Ingestions” series, (the Army version of NCIS). You just know it had to be a very strong story to sell the series to the publisher. It is! Actually, I liked this story better than NCIS and I used to be in the military police. The author was an 'Army brat' with excellent current military advisors in the family so she has all her military details down pat.


“The Officer’s Secret” is a 5-star thriller.


I wonder if the next books in this CID series can possibly be as good as this one. Time will tell. In the meantime, if you like a good mystery, a good suspense story, and a good romance, I don't think you can do better than reading "The Officer's Secret".