“Love on a Dime” Is Such a Good Story, You Have To Wonder Why Someone Didn't Write It Before Now! 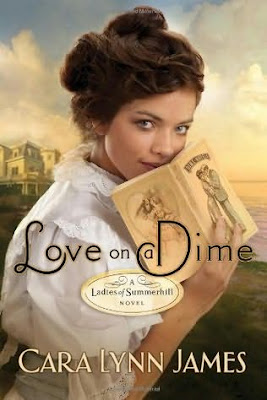 The heroine, Lilly Westbrook, is secretly a dime novelist who is very popular. Even the upper class ladies can’t help themselves and are often found reading their servants copies!

Lilly must still protect her place in society. High class ladies might read dime novels but it is unthinkable that one of them would actually write one. If word got out, Lilly’s family reputation might be ruined.

Lilly can’t afford to quit! She gives the money she makes from her “Fanny Cole” novels to the Christian Settlement House – a worthily charity that is in desperate need for money as the story opens. But there is a problem: an evil villain is blackmailing Lilly to keep her writing a secret. Will she pay the blackmail?

A Wonderful Time For a Romance!

“Love on a Dime” takes place during interesting times! It’s 1899 -- a time when people go about in horse and carriage but think nothing of calling their friends in New York City on the telephone. The location is also interesting: Newport as a resort for the old and newly rich. There’s tennis, sailing, gambling, dancing, everything for the privileged class.

The hero, Jackson Grail, is a good man who makes a fortune in the Alaska gold rush after Lilly’s father let it be known he was not good enough to marry, Lilly, his daughter. Back form Alaska, six years later, Jackson buys the publishing company that handles Lilly’s books. Jackson does not know who ‘Fanny Cole’ really is. But he needs to know. She is his best selling author and he needs to up her sales by putting her on a book signing tour. The best selling author for Jackson’s competitor is selling many books on tour and she is not nearly as good as “Fanny Cole”. His company needs the revenue.

Thinking Jackson was gone forever after he disappeared years ago, Lilly is now engaged to a very rich man. Since she has been ‘on the shelf’ for a very long time, this may be her last chance to marry and marry so well. Lilly gets engaged much to Jackson’s despair.

The plotting in “Love on a Dime” is also very interesting. The story reads like a mystery with many twists and turns. I was wondering if the author would tie-up all the loose ends before then end of the book and she did. The last author I read who could plot this well was Marion Chesney. She went on to become one of the UK’s best selling mystery writers: M.C. Beaton. She’s my favorite mystery writer for sure and also my favorite Regency Romance writer.

To make “Love on a Dime” even more interesting, the dime novels that “Fanny Cole” writes all have real literary merit. Each has a strong Christian theme: demonstrate the rewards of living a Christian life as a good example to the poor women in the city who endured such incredibly hard lives.

“Love on a Dime” is so interesting that I went on eBay and bought a real dime novel printed in 1887. So far I am on the 5th Chapter of “Edna’s Vow” and I am totally hooked! And I’m totally happy I chose to read “Love on a Dime”! 5-Star Wonderful!

There is Everything To Like in “Love on a Dime”!


A Look at a Real Dime Novel

First Page is Given Blow:

Oh, bitter, chill it was!
The owl, for all his feathers, was a-cold;
The hare limped, trembling, through the frozen grass
And shivering lay the flock in distant fold.
KEATS.

A bitter winter night. Snow lying soft and thick, and white in city parks and country meadows; and snow, lying crisp and hard and soiled – ground down to the consistency of fine sand, and mixed with the dirt of the road – alike in city streets and country lanes. Frost, snow, and ice everywhere. Ice on the window-panes, on the slippery sidewalks, in the river, in the gutters, in the city fountains and the country. ponds; and icicles of all shapes and sizes – from a delicate silvery thread to a formidable, glittering club two to three pounds in weight, hanging from roofs, sheds, waste-pipes, cottage and farm-house caves, window-frames, rocks, trees --everywhere in short, where water could drip and freeze and icicles hang; some of them trembling ominously, with a threat of possible danger to the heads of thoughtless passers-by, as the cruel north wind, bursting and howling around corners in sudden gusts, shook them (end of page one).


Bought on Ebay – May Be Only Copy in Existence!

I liked reading “Love on a Dime” so much I bid on Dime novels on Ebay and I won “Edna’s Vow” just so I could see what a dime novel was like. First I found it to be as big as today’s trade paperback. Next, I was surprised by the lack of typos. Next I found that I was quickly hooked into the story. This book is very well written. The fans who bought these dime novels were paying an amount that was just about equal to one hour’s wages.

While the printing is done very cheaply, it seems a great deal of effort went into making the story error free. The fans loved these dime novels and they read them because they were compelling reads. I am hooked on reading “Edna’s Vow”. While the style is archaic once you get used to it, the story reads just fine. I will review “Edna’s Vow” as soon as I finish. So far, five chapters into it, I will give it 5-Stars!
Posted by Vince at 6:06 PM