"Wrangler in Petticoats" -- A Book Mark Twain Would Enjoy 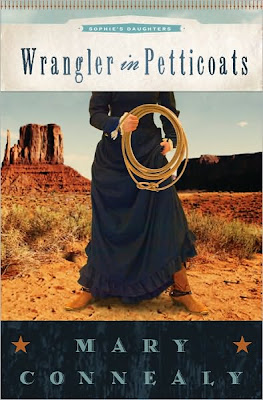 Mary Connealy reminds me a lot of Mark Twain. Like Twain, Connealy is a prolific writer, she writes with an insightful sense of humor, she often uses children to demonstrate the foibles of adults, her books can be read by adults and children alike, her stories show a keen understanding of what it is like to be a child, plus the time periods and locations are very similar. To top it off, both Twain and Connealy like to write the occasional mystery.

When you read a Mary Connealy novel there is always more 'going on' than what is 'going on' on the page. "Wrangler in Petticoats" is no exception. The hero, Logan McKenzie, is an artist trying to capture the wonders of the West on canvas. The story takes place in the Yellowstone area of Montana.

Portrait of a Western Artist

Logan's love for his art is wonderfully expressed by his creative passion. Connealy's descriptions of Logan's paintings are like looking at the Thomas Moran paintings in Tulsa's Gilcrease Museum. Logan's love of art exactly mirrors how many great writers have felt about their craft.

Art as a Demanding Mistress

Logan is so devoted to his art that he fears he will make a bad husband and father. He believes that the first time an ideal sunset or other natural wonder presented itself; he'd drop everything and start painting. He thinks he'd do this even if it meant neglecting his family. Logan has good reason to believe this because that is exactly how he has behaved his entire life. Logan says he paints because he cannot not paint. This echoes the stated view (I cannot not write) of the author and I am sure it was also true of Mark Twain.

Into the Artist's Mind

Logan is a very interesting character. The author's detailed portrayal allows the reader to see how a genuine artist experiences the world. It is especially insightful to watch how Logan tries to explain his highly unusual 'impressionistic' style painting to the heroine, Sally McClellan.

Almost no one out west would have seen an Impressionistic painting in 1882. The heroine's reaction is classic. She complains that the painting is weird because it doesn't look like objects should look. However, the art of photography was rapidly advancing at this time and artists knew that they could not compete favorably with photography in capturing reality with perfect precision. Thus a new art style was being invented which strove to capture what the artist was 'feeling' while painting the picture. "Wrangler in Petticoats" gives the reader a great feel for this unique period in the history of art. This book is far more than a little romance.

The Heroine as 'One of the Guys'

Sally McClellan is a tomboy but she is more than just 'one of the guys' -- she's often better at being a cowboy than the men are. She is so much her father's 'son' that her father actually tries to get her to be more feminine.

Even when Sally's mother insists that she dress in women's garments, she still changes into men's clothing as soon as possible. The author seems to like all her heroines to be more competent than men! But then Connealy is also a humorist. Without a doubt, Connealy heroines make great role models for adolescent girls.

"Wrangler in Petticoats" -- Not a Cozy Tale

The location is the beautifully rugged Yellowstone area of the Montana territory. The story opens with a bloody bushwhacking scene that instantly pulls the reader into the tale. The only author I've read who could do this type of opening as well was Louis L'Amour. Poor Sally is gut shot, falls off a very high cliff, and survives only to have killers stalking her for the rest of the book. The tension never lets up. "Wrangler in Petticoats" demands the reader's full attention.

Sally sees Logan as a useless man who can't do much that a real man should do. All he can do is paint pictures. She does not see painting as work that could support a family. Unfortunately for Logan, he falls in love with Sally almost immediately but considers himself to be a dreamer and not someone who would make a good husband and father. Sally fully agrees with this assessment. Because of this impasse, Sally is the one who must come to Logan. She must learn who he really is by coming to understand his art and his passion for life. By the end of the story, Sally is a very different person. Logan is also different in a more pragmatic way.

Sally and Logan are not your typical romantic hero and heroine. Each is a remarkable character who will become your friend by the end of the book. Like Mark Twain's characters, Sally and Logan will still speak to you long after you've read the book.

"Wrangler in Petticoats" - Absolutely Wonderful! --
Highest Recommendation!
Posted by Vince at 10:10 AM