A Doctor’s Devotion! A New Series! A New Voice! A New Vitality! 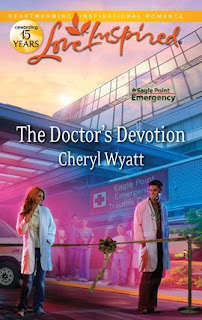 I’ve read all the author’s “Wings of Refuge” books and if I didn’t know before hand, I would think that “The Doctor’s Devotion” was written by a different author.


The “Wings of Refuge” are exciting books. As an Air Force veteran myself, I really enjoyed the heroics of the PJs featured in those stores.  The writing style in the “Wings of Refuge”  is exuberant, fast paced and action orientated. It’s like an impressionist painting painted in only one hour. It has a ‘voice’ that cannot be obtained in any other way. It’s a great series to read.

"The Doctor’s Devotion" is Different!

For example, the heroine, Lauren Bates, is as angry with herself for being jealous of  Mitch Wellington’s very close relationship with her grandfather as she is angry with him for usurping a familial relationship that she feels rightly belongs to her.

"Mitch laughed. The sound both grated and soothed. Grated because of the closeness he obviously shared with her grandpa, which stirred a surprise pot of jealousy. Soothing because Mitch’s Grand Canyon voice could make a typhoon swoon."


In “The Doctor’s Devotion” the author has to manage unresolved conflicts within both the hero and the heroine and then, with all this going on, has to mesh these simultaneous conflicts together so that they evolve naturally into a loving relationship. This is like working on an automobile engine while it is running.


The Gradual Deep Process of Falling in Love

Much of the action in “The Doctor’s Devotion” is internal. The very process of falling in love is shown in great detail. When the hero and heroine do make a small move towards falling in love, often one or the other will pull back. These hesitancies were totally consistent with the character's  motivation for not wanting to form a relationship.

Watching this internal process of falling in love was much more fascinating than the typical emphasis given to resolving  the external conflicts keeping the hero and heroine apart. This approach is more reflective, deeper, and insightful than I’ve experienced in the author’s other books.

In reading this book I tried very hard to determine exactly what was making the author’s voice seem so much more mature and confident. Then I found my answer. “The Doctor’s Devotion”  is written in what I call deep knowledge.

Writing with knowledge is like writing from the outside in. It is like reporting on an event you witnessed. I believe “Wings of Refuge” is written with knowledge of the events described in the books.

Writing with deep knowledge is like writing from the inside out. It is like reporting on an event that you actually were a part of. It is writing as an insider. “The Doctor’s Devotion” is written from inside out. This is probably because the author is an RN nurse.

Writing from the inside out makes a profound difference in the writer’s voice and how realistically the narrative resonates with an insightful reader.

For example: I've read many Medical Romances. In many of these novels medical terms and conditions are usually mentioned. These terms are in the story because they are expected to be in the story. Readers enjoy the medicine part of genuine Medical Romances. I especially do because I have a great deal of experience with doctors, nurses, and with being a patient in a hospital.

When I read these medical terms I know right away if they are technically correct. I also know if they are being used in context as they would really be used in real life. Often they are not. The use is correct but stilted. The writer actually does not know how the terms would be used and not used or how their use would be expressed under actual conditions. (In a way it’s like the difference between how a foreigner would say something technically correct in Italian and how a native Italian would express the same thing.)

When a Medical Romance is written from the inside out, by an experienced doctor or nurse, then all the usage is where, when, and how it would really be used. The terms flow organically from the context of the situation. This is the best writing. This is at the heart of the new voice expressed in “The Doctor’s Devotion”.  And it is the basis of the author's new confidence, the greater maturity and the refreshing vitality.

As good as the “Wings of Refuge” books are, I believe that “The Doctor’s Devotion” stands an order of magnitude better. “Eagle Point Emergency”  represents a new beginning in the author’s ongoing experience.

It is difficult for outside in books to win national book awards. I predict that with the “Eagle Point Emergency” series, the author will garner her share of laurels.  This is the kind of writing that judges appreciate.  It is a very good book.  I look forward for many more to come.

About the story as provided by they publisher:

"When he fled Eagle Point years ago, former air force trauma surgeon Mitch Wellington left only broken dreams behind. Now he's back with a new dream--opening a trauma center in the rural area and saving lives. He hopes to hire the quick-thinking nurse who impressed him during an emergency. But Lauren Bates lost her faith and doesn't believe she deserves to help anyone. Mitch knows firsthand what loss feels like. And it'll take all his devotion to show Lauren that sometimes the best medicine is a combination of faith, community--and love."

The Doctor’s Devotion! A New Series! A New Voice! A New Vitality!

The Author's Best Book to Date!