Make a Paradigm Shift & Freshen Up Your Creative Approach to Writing 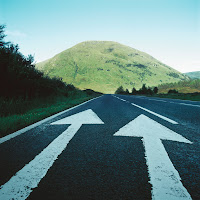 "Character-Driven/Plot-Driven"
Vs.
"Story-Pulled"
Sometimes it is best for creative people to break out of the paradigms they are using to structure their thought patterns. Writers have many models available to simplify complex problems.
One approach to writing a novel has been described as a dichotomy between ‘character-driven’ stories and ‘plot-driven’ stories. I am sure this model is useful but it is just an intellectual construct. There are many other ways to look at the same situation.
I think the character-driven/plot-driven dichotomy is the wrong model. At least it is for me. I see both plot and character as being ‘pulled’ and not ‘pushed’ to the end of the story.

Think of plot and character as strings that can’t be pushed but can be pulled. Shift the paradigm.

I start with story. I want to create a story that, when it’s over, the readers will feel elated and believe that it was a great story. It does not make any difference to me what factors played the biggest part in the dynamics of the outcome. It could have been the plot or it could have been the characters.

Once I have a great story, I can go to ‘central casting’ and hire the best characters for the part. I can do this because I am the boss, the producer, and the needs of the story come first. (Not prima donna characters.) When I know what the story is and how it should end, then everything else follows. Like gravity, everything that happens in the book falls naturally downwards towards the conclusion. In this sense the story is pulled to its conclusion.

I might want to create a story about a washed-up boxer who makes a comeback and has people cheering at the end when he wins his last fight. Characters and plot are both free to rearrange themselves in whatever configuration that best meets the needs of the story.

In story telling, the story should come first. Create a great story. Make sure it has a strong Moral Premise. Then let characters and plot fall together to form the best story outcome.

Try this new model or paradigm. See if it helps. You can always go back to the old ways.
Posted by Vince at 11:27 PM