Café du Jour: One of Best Uses of First Person I’ve Ever Read! 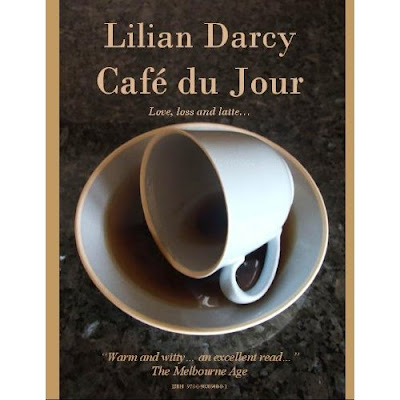 “Café du Jour” is the Best Reason for eBooks! Just Released as a Kindle Book!
Lilian Darcy’s, Out-of-Print, "Cafe du Jour" -- is a Hidden Classic Sure to Thrill Fans!

Café duJour
Lilian Darcy
Paperback Mira Books (2007)
Kindle Book2011
While Lilian Darcy is an accomplished Romance author, “Café du Jour” is not a romance. It’s a serious introspective journey of self-discovery and self-actualization. No compromises are made to sweeten the reality of this story. Everything is just right out there in front of the reader. There are no genre constraints or expectations in "Cafe du Jour" -- just raw writing power.
“Café du Jour” is a 'book-of-the-heart' and not of the pocketbook. Reading this story is like taking a beautiful show horse, entering her into the Kentucky Derby, and then watching her, finally freeded, race to a winning finish.
Best use of first person POV!
I must disclose right at the start that I do not ordinarily like first person POV novels. In my opinion, first person novels start with three important drawbacks:
1. you can’t get into the other characters’ minds
2. you can only go where the POV character goes
3. too much of the book usually depends on the dynamic personality of the POV character.
First Person does have one huge advantage in suspense and action stories when danger is imminent. There is an immediacy to the action with first person. This is especially true in the present tense. The reader faces the same dangers most directly alongside the POV character.  If the POV character has a dynamic personality and faces danger with wit and wisecracking bravado, as Stephanie Plum does in Janet Evanovich's books, then first person can enhance the fun.
First person is also a good way to give the reader the vicarious experience of feeling what it is like to be a hunted person or a cop under fire.  However, first person is at a big disadvantage in a serious multi-character novel where the reader wants to know and learn from the other main characters. It is also harder to creat a fulltime, wise and witty, POV character in a longer mainstream novel.
The "Café du Jour" Difference

This is a difficult concept to grasp at first but please give it your attention. If the reader is thinking the POV character's very thoughts, while not directly being told a story narrative, then how does that differ from an individual thinking those same thoughts?

If the reader’s internal dialogue is the same as the POV character’s internal dialogue, then for that moment, there is an identity.  The reader is not that person doing ‘x’, the reader is that person being that person. (I know this is a difficult concept but this awareness of being someone else by virtue of thinking their thought, will be forced upon you when you read this book. You just have to read it and experience it.)
Important: I’m not talking about ‘free association’ or ‘stream-of-consciousness’ as you might find it in some experimental novels. In "Cafe du Jour" the POV character’s thoughts are the concentrated thoughts of a person trying to think things out to a purpose. The internal dialogue moves the story forward. The thoughts are not random. As thoughts they don’t need further interpretation by the reader. In essence, for the hours spent reading this book, the reader will experience being the POV character, facing the POV character’s  problems and thinking her thoughts.

What Could be so Interesting as to Keep a Reader Inside Someone Else’s Mind for Hours on End?

Before I read “Café du Jour”, I would have probably said, “nothing.” It was only after I was totally captivated by the POV character, Susie, that I became eager to spend time in her mind.
“Café du Jour” is about the reality and the pain of living. It explores the meaning of life itself. It’s about sincerity and authenticity. It’s about what’s real and what’s not. It’s about self-discovery, self-delusion, self-actualization and a dozen other self-directed theories.
The hero, Jody, is a dynamic hyper-creative personality who is sometimes a madman, conman, genius and part-time ski instructor. Jody schemes how to make $28,000 by putting on the ultimate self-discovery workshop at $2,800 a student. The course will last weeks. The sessions run from 10 am to 10 pm on the days it is held. Against her better judgment, Susie helps him as a plant in the workshop.

Here is what the heroine thinks of Jody:


"Jody claims to have a degree in Philosophy from Cambridge University, mostly I believe him, despite the lack of concrete evidence. There’s this idea in Philosophy, apparently, that the laws of gravity didn’t exist until Newton discovered them. Or something. It has been a surprise to me, since knowing Jody, how applicable this concept is to many of the events of everyday life.”
Susie asks Jody what he is going to cover in his workshop:
“Tons of stuff. Massage, relaxation, trust work, games. Probably, yeah, past life therapy.” He scribble something. “I’ll research it on the Net. Awakening your dragons. Crystal energy, maybe."

What Jody is going to do is use all the best ideas, or at least the most popular ideas, from the most respected gurus and self-help movements.
Now here’s the thing: in most books like this, the actual ideas would not be presented and argued. What author would be knowledgeable enough to be able to present all these ideas and then be able to argue them as well? Lilian Darcy is. I’ve spent forty years studying self-actualization programs; I’ve even conducted dozens of seminars myself. The ideas preseted in "Cafe du Jour" are the real thing. What’s so fascinating about this book is the way the characters themselves can’t be sure what they really believe and don’t believe.
The students who come to Jody’s workshop are past hands at going to these workshops. They inquire, argue and are not easy subjects to con. When something works, Jody and Susie, both wonder if the teachings actually are true. The reader is in the same position as the workshop students. What really is true?

Susie, the heroine, is a European trained chef now living at home in Australia.  She is a chef in a resultant where the owner is exploiting her. Her live-in boyfriend, Jody, travels around the world being a ski instructor in the winter and doing odd jobs at other times. He also seems to be exploiting Susie and perhaps everyone else he deals with.

Karen is Susie’s sister who is in the hospital after a terrible disfiguring accident which may have left her mentally challenged. Susie is under great stress. She may be at the moment of maximum personal crises in her young life. All this makes for compelling reading.

Given the very personal nature of the first person POV, the impact of this emotional turmoil is almost overwhelming. In a way, “Café du Jour” is a learning experience that may well leave the reader a different person.
If you would like to take a voyage of self-discovery, experience a nebulous romance, and feel what it is like to be another person, then “Café du Jour”  could just be a must read.

Highest Recommendation!
A Must Read for Self-Actualization Adherents!
Posted by Vince at 4:21 PM