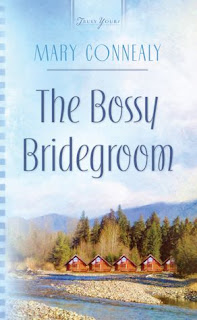 “The Bossy Bridegroom” Does for Spousal Abuse what Francine Rivers’, “The Atonement Child” Does for Abortion: It Seriously Deals With a Subject Most Writers Avoid…And it does it with Excellence…

I classify,  “The BossyBridegroom”, as literature because it has a is universal and timeless message. It is also addresses the human condition and is structured to be read on several different levels. There’s the narrative/ostensive level; the Christian/religious level; and the psychological/philosophical level.

“The Bossy Bridegroom” is not a genre romance and it does not have a traditional romantic HEA – happily ever after ending. In fact, the ending that I fully expected to happen and which I would not have liked to have seen on a work this serious) – did not in fact happen. I was surprised. The reader cannot rely on genre expectations to predict the ending of this book.


I once compared Mary Connealy’s writing to Mark Twain in that there are many similarities in their art. Here is a part of that review:

“Mary Connealy reminds me a lot of Mark Twain. Like Twain, Connealy is a prolific writer, she writes with an insightful sense of humor, she often uses children to demonstrate the foibles of adults, her books can be read by adults and children alike, her stories show a keen understanding of what it is like to be a child, plus the time periods and locations are very similar. To top it off, both Twain and Connealy like to write the occasional mystery.”

Now, in addition to these similarities, Mary Connealy has done something else like Mark Twain. She has written a very serious book. Mark Twain was highly intellectual and he wrote about everything. Whenever Twain would come out with a serious book his Tom Sawyer, Puddenhead Wilson, and Connecticut Yankee, fans would be furious with him! “Don’t spend your time writing these serious books. Write the humorous satire books that we love so much.”

“The Bossy Bridegroom” is a serious book. The reader who only wants to read a lighthearted, happily ever, romance, may not enjoy reading this book – unless they also enjoy a deeply serious novel.

Who Should Read “The Bossy Bridegroom”

People who enjoy serious literature that requires them to think. People who can read a book on several different levels and enjoy the experience. I believe that reading this review will provide enough information for the reader to decide if “The Bossy Bridegroom” is for them.

The “Bossy Bridegroom” is a story about a woman who was verbally abused to the point the marriage fell apart and her inability to cope alone caused her to put her baby daughter up for adoption. She moves to a new location to rebuild her life. She finds Christ, becomes a Christian, develops many friends as she devotes her life to serving others in various chaitable pursuits. Since she will volunteer to help anyone who asks, an outside would be justified in thinking that others are taking advantage of her fragile nature.

A few years later her husband also comes to Christ and becomes a Christian. He wants to make amends. He wants to be the father and husband he belives a good Christian should become. He also seeks foreginess for his past transgressions.

The conflict is this: should such a woman give an abuser like her husband (they never devoiced) a second chance.

Some readers will say NO, never! Such men never change. The wife would be a fool to take him back and subject herself to more abuse. Some readers will also find the wife distasteful for putting up with the abuse for so long in the first place. These readers will not be able to read this book with an open mind and should definetly not read the book.

The narrative is about the attempt at reconciliation, forgiveness, and redemption. As such, it is not a genre romance with the typical HEA.

On the Christian/Religious Level

“The Bossy Bridegroom” is not an easy, goodie-two-shoe, Christian romance where the two parties find Christ, offer forgiveness, and are magically redeemed into a new life of happiness.

This is not easy or superficial Christianity. Most of the Christians in the story warn the wife not to have anything to do with the husband. Men like that don’t change even if they do find Christ.

On the deepest level this book asks “Do you take Christian teachings seriously? Do you act as a Christian even when it is risky and can be painful? Specifically do you really take your wedding vows seriously? Is it until ‘death do you part’ or is it only ‘until divorce do we part’? Even deeper: should you trust God?”

The husband and wife in this book are honestly trying to apply their Christian beliefs. They are trying to ‘walk the walk’ and risk the pain and disillusionment a failure could produce. These are brave people. They should not be stereotyped as weak, evil, or pathetic.

Essential to the success of the story at the Christian/religious level is the advice and counseling of the pastor. The pastor does not give cliché Christian advice. He knows the reconciliation is probably not going to work. He gives the wife an inflatable baseball bat to smack the husband at any point he becomes verbally abusive. He also gives her his cell phone to call him at any time, day or night, so he can come and drive the husband away.

The wife is not hesitant in using the bat on her husband. In fact, he can be wacked for just thinking about saying something abusive.

“The Bossy Bridegroom” is a powerful example of Christian principles being employed when the stakes are at the highest levels. This is a very meaningful Christian fiction. It would be hard to think of a better, more thought provoking book, for a Christian group discussion.

On this level, it makes no difference that “The Bossy Bridegroom” is about spousal abuse, verbal or otherwise. It could just as well be dealing with alcoholism, gambling, drug abuse, or serial adultery.

At this level the questions are different. “Do people really change or do they just modify their outward behavior?” “What is really going on in these abusive situations? What do both parties get out of it – if they are staying together?” “Does Christian conversion change a person in reality or is it like turning a sixty minute timer to the sixty minute mark? If you don’t want the arrow to revert back to zero, do you have to keep turning the indicator back to sixty?” Is the story logically sound or has it been compromised to meet the needs of the plot?”

Philosophers can be very hard on a book that has a contrived plot.

All the questions I’ve asked about are dealt with in the book. The book does not doge difficult issues. Do people change with Christian conversion? These people did but there is a constant pull to revert back to type. In this case both the husband and wife had abusive fathers. Abuse was the norm in their families. This makes permanent change in their relationship very difficult.

Why do people stay in a relationship like this? Pop psychology might suggest that the wife is just a pathetic ‘dish-rag’ who is too wimpy to stand up for herself. “The Bossy Bridegroom” is not pop psychology. What you see in the book is the dynamics of a real relationship. The abusive situation is like scratching an itch. At first it brings relief and is pleasurable. However, the scratching soon become painful, an open wound can result allowing an infection to poision the system.

The wife likes the pleasure and has to fight the temptation to fall victim to its temptation. The husband likes the power he enjoys but also wants and prays his wife with fight back…will help him. This is not just because of his Christian beliefs. Psychologically the husband has grown to love and respect his wife more when she is independent. He now sees her as more beautiful than when she once worm more makeup to please him. The husband sees the wife as someone of great value – if only she would use her ‘bat’ quicker and more often. The husband is trying to change but it is like the force of gravity keeps pulling him back to type. He needs the help of his wife just as she needs his help to keep the relationship on track. It’s not easy. It takes constant effort. And it takes more than prayers.

Does the story have logical integrity? Absolutely. I didn’t think it would. I thought the pull of a romantic ending by a romance writer would overcome the outcome dictated by the course of events. It didn’t. It had the ending it needed to have.

“The Bossy Bridegroom” – Life on a Knife edge – A Total Thriller!

This is one of the most thrilling, or more accurately, nerve wracking, books I’ve read in a long time. The deeper the reader gets into the book and develops an understanding of the characters, the more intense the reading experience becomes. At every point in the narrative the entire enterprise could fail. The situation is so tightly balanced that any unwanted nudge from any direction will lead to destruction. Any misstep by the husband, wife, outside person, or even unrelated event can tip this delicate balance and the struggling relationship will die. This disaster can happen on any page in any paragraph. It’s like walking around with a time bomb and hoping at all times that you can make it to safety before the things blows.

The more you like this book, the more reading it is going to set you on edge.

I think by now you know whether you want to read “The Bossy Bridegroom” or not. I loved the book. I give it my highest recommendation. But I must say: it does not have the most apropos title, cover art, or publisher. To be fair, if I were the publisher, I would not want to let a book this good go to another house. I’d like to see a title like “Surviving the Battle”, and artwork that suggests a more mainstream novel dealing with stress.