Out of the Blue Comes A Masterpiece! “One For the Road” -- Five Wonderful & Zany Stars! 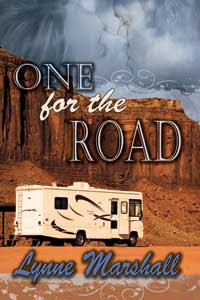 “A Lady's Diary of Her Middle Age Crazy RV Tour of the Southwest With a Country Music Band!”

Bold!  Exciting!  Original!
Where In the World Did “One For the Road”  Come From?

I mean it!  Out of the blue!  Lynne Marshall writes a masterpiece!  Well, it’s not like, “War and Peace,” but then it’s not like any romance I’ve ever read either!

The heroine is a recent middle aged widow out of luck and nearly out of money trying to get her huge RV back to California and home.

The hero is a washed-up, one-hit-wonder, country music ‘star’ hoping to make a comeback after ten years. He has a second rate ‘tour’ lined up in country bars and roadside taverns throughout the southwest.  He just needs a way to get him and his band to those places. He doesn’t have the money…yet…but he does have a supply of Viagra. Are you still with me?

The story is fun, wacky, zany and so realistic, it would be very easy to believe that it’s taken from the author’s person diary.

I keep thinking as I read this book: is this fiction or is it nonfiction?  The bars are realistic rough places. The band members are some pretty hard characters. They are hard drinking, foul speaking, womanizing and somewhat loveable.  These guys make Waylon and Willie look like choirboys. The bars are so well described you just know they have to be real places.

The author also shows a detailed knowledge of the country music business along with the ins and outs of running a band tour.  The heroine drives the RV and does the cooking. She also goes to some of the shows in some pretty scary dives. However, she’s ‘with the band’.  Talk about character growth. You can watch her growing, page by page.

Do You Speak Southwest?

Lynne Marshall has invented a new idiom to describe the landscape and events in this book. It is as much fun to read how says something as it is to find out what that something is!

“One for the Road” shows the author at the height of her powers. It’s almost as if she were saying “Look what I can do when I’m totally free to be creative and fly wherever I want to.”

The action takes place all over the southwest and back again.  The author had to have done it. The descriptions, the distances between towns, the temperatures, the sounds at night, the smells of the desert, the ins and outs of every kind of RV park – it’s all there in the story. "One For the Road"  lives and breathes the southwest and I’m a major southwest genre fan.  If you love the southwest, this book delivers!

Oh, yes, also in the book are: life and death danger, bad guys, nasty music people, cops, and RV chases. There is never something not happening!  Each band member is a certified character almost too real to be fictional. What an experience!

I was sad when "One for the Road" ended but I’ll read it again and again. It’s more than a keeper…it’s a repeater!

I’ve enjoyed the author’s Medical Romances for years now. In fact, she has two recent Medical Romances out right now. But don’t let that fool you. “One for the Road” will be like no romance you've ever read before. It's like having too much fun within the romance genre!  And if you're like me and would enjoy reading about an 'older' hero and heroine: this is it!

Five Stars!
It’s as good as it gets!