“A House Full of Hope” – Five Stars and the Best Yet! 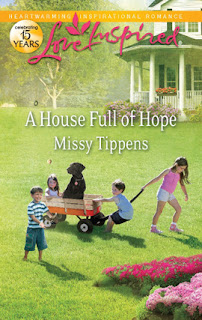 Missy Tippens is an Amazing Author Who Writes 5-Star Inspirational Romances With Each New Book Better Than the Last!
"A HouseFull of Hope"
MissyTippens
Love Inspired
February 2012
Author Review
How does an author make a 5-star book even better? She grows as a writer. She demonstrates a burning desirer to take God’s gift and manifest it to its greatest extent. She never stops learning. She shares what she’s learned by teaching others.  These are just some of the things I’ve experienced the author do.


With each book the author has layered in a greater depth of understanding while creating richer conflict. This provides the reader with interesting characters who seem to grow with each page. As always, there is a strong inspirational message that renews the spirit and warms the soul. Better yet, Missy Tippens does all this in an unassuming voice which, with each word, demonstrates her love for her readers.
Reading a Missy Tippens romance is like receiving a warm hug from someone who really cares about you. I never hurry a Missy Tippens’s romance. Why would I want the reading enjoyment to end quicker? The author takes extra time to write her books and I take extra time to savor every word.
I enjoy ‘feeling’ the author’s kindly voice. I like mingling with her characters. These are genuine people who you would like to get to know in real life.
If I sound high on the author, it’s because I’ve never been disappointed with her books. Tippens’ books are auto-buys and auto-reads. They preempt any book I am currently reading at the time they debut. If asked: “Which Missy Tippens book should I read first”, I instantly say, “Read any one of them.”
Reading a Missy Tippens book is like being in a state of mind you never want to leave.


Book Review of "A House Full of Hope"

"A House Full of Hope” may be the author’s most heartwarming and inspirational romance to date. I believe this because the conflicts run deep and are not based on simple misunderstandings. The characters are so sympathetic that they will win your heart within a few pages. These are good people who suffer through no fault of their own but yet carry on with faith and determination. These are characters with character. You will care about them and that makes the reading enjoyment run far deeper.

Solving the many conflicts in “A Hose Full of Hope” requires both redemption and forgiveness. It also involves characters to grow and forgive themselves.

The hero, Mark Ryker, has recently found Christ and returns to his home town to seek forgiveness from the many people he hurt ten years earlier. Mark has a lot of genuine guilt to atone for. He was responsible, in part, for his little brother’s death which lead to his mother’s death and his father becoming estranged from him.

Mark became a troubled teenager. His drinking helped a girl hang with a bad crowd. The girl went wild and became a long term drug addict. Mark has not seen his father in years. They are not even talking. After Mark ran away from his problems he eventually cleaned up his act and started a business that his made him rich.

The heroine, Hannah Hughes,  is the younger sister of Sydney, the woman Mark badly influenced. (He's the man who ruined her life.) Hannah is a widow with four little children. She once had a crush on Mark but he only saw her as a little pest at the time.

Most of the town has good reason to dislike Mark -- especially the heroine’s mother Donna. Mark thinks that becoming a good Christian and asking for foreignness should clear the way to peace but it is not that easy. Being a Christian is not easy. Some people find it very hard to forgive. I very strongly sympathized with Donna. I would not be very willing to forgive Mark myself.

Mark’s one hope is the heroine but the heroine’s mother drives her away when she even befriends Mark.

“A House Full of Hope”  reads so well because the characters are so real, the conflict is genuine and the road to happiness is not easy and nor is it certain.

A Very Moral Book With A Clear Moral Premise

from "A House Full of Hope":

“Ann’s coffee-cup slogan popped into his mind and made him laugh. Money can’t buy love. Maybe God had been trying to show him something even then. And hadn’t God proven the point the whole time he was in Carinthia?


“No matter what he tried to do for people – with money –his efforts hadn’t made a difference.
But when he spent time working with them, relationships had started to slowly improve.”
“What if he went back and showed them he wanted to commit to them? Showed Donna he was committed to Hannah. Showed Hannah he was committed to Hannah.”
Page 147 on Sony eReader… (Now that’s a Moral Premise).
If You Want to Read A Better Book Than
“A House Full of Hope” You’ll Just Have to Wait for Her Next One! They Just Keep Getting Better!
Missy Tippens 5-Star Books:
Her Unlikely FamilyJanuary 2008
His Forever Love, May 2009
A ForeverChristmas  November 2009
A Family for Faith (LoveInspired) April 2011
Posted by Vince at 7:53 PM