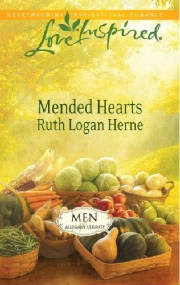 If you were an unpublished romance author would you write a book about hospice, death, dying and romance? Ruth Logan Herne did just this in her debut romance “Winter’s End” – a book so extraordinary that it’s been nominated for the Carol – the highest Christian book award. I call a book like this, one with a great idea but one too difficult to attract most authors, a ‘Bell the Cat’ theme.

Ruth Logan Herne has 'belled another cat' in “Mended Hearts”!

“Mended Hearts” will fool the reader at first. Like its cover art, the story begins as an exquisite still-life painting, drawn on a small canvass, with few characters and little external action. The heroine, Hannah Moore, has been traumatized in the past. Given Hannah’s fragile state, the hero, Jeff Brennan, has to make repeated attempts to calm her skittish soul. To his credit, Jeff, has the empathy of a horse whisperer. Jeff’s numerous attempts to approach Hannah create a curious pas de deux as the story unfolds. "Mended Hearts" begins like an orchestra playing quieter and quieter and then it explodes! 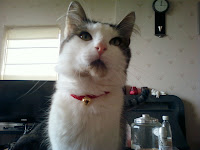 Protect your heart: “Mended Hearts” is about one of the most tragic and terrifying events that can befall a school teacher. In this story the events are magnified almost beyond emotional endurance!

What begins as a cozy still-life romance ends in a supernova of feelings! Expect tears to flow. Then be prepared for a gusher of ‘happily ever after’ excitement.

The heroine, Hannah Moore, is a former high school science teacher who has given up teaching and moved to a small town. Hannah now holds two jobs to make ends meet. She has mostly withdrawn from the world.

The hero, Jeff Brennan, is a top executive who is work-driven and trying to do the right things for the community because his father shammed the family name. Jeff seems to be just like the man who deeply hurt the heroine. She has not dated since that hurt over three years ago. Jeff appears to be just wrong for Hannah.

At times, even Jeff feels that Hannah is not right for him. Yet, he is attracted to her anyway. Against his better judgment Jeff keeps approaching Hannah and keeps being rebuked. He begins to doubt that Hannah is worth the effort it will take to warm her heart but he keeps at it anyway. Love doesn’t have to make sense.

The story has strong Christian elements: forgiveness, redemption and atonement all play a large role. However, it all wouldn’t work without the authentic emotions generated by the fearless writing. “Mended Hearts” goes beyond showing you what happens: it puts you into the center of the story where you can feel your heart beat in sync with the hero and heroine. You don’t observe “Mended Hearts” – “Mended Hearts” happens to you.

“Mended Hearts” is book two of the, Men of Allegany County series, so there are some familiar characters for those who have read the first book. There is also one more book to come -- good news for the author’s many fans.

(CAROL Award Finalist – Winner to be Announced in September)
Posted by Vince at 3:01 PM