Winner: of the “Showing not Telling” Award of the Week! 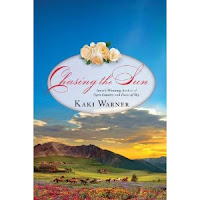 From “Chasing the Sun” by Kaki Warner:


Set-up: The heroine, Daisy, has just been given a singing job that she desperately needs. It’s 1873 and the location is San Francisco. Can you tell Daisy is exuberant without the author telling you she is exuberant?

“She giggled then laughed out loud, startling a drunk dozing behind a refuse bin outside a garment maker’s shop. 'I’m going to be a star,' she called gaily to him as she hurried by.”


This has added interest because the heroine is on an emotional high while in one of the worse locations in San Francisco. Also it is Daisy who disturbs the drunk which is the opposite of what usually happens: drunks disturb the regular folks. This is how to ‘show’ and not ‘tell’.

“Chasing the Sun” is the final book in the Blood Rose Trilogy and was just released on January 4th.
Posted by Vince at 2:29 PM