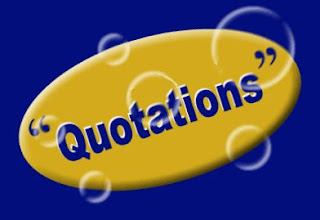 Who Wrote these Quotes: Me or Someone Famous?
(1) "No man but a blockhead ever wrote, except for money."
Samuel Johnson or Vince Mooney

(2) "The best quotations in the world will still only tell you what you already know".
Dag Hammarskjold or Vince Mooney

(3) "A novel only exists while it’s being ‘played’ in a reader’s mind".
Jean-Paul Sartre or Vince Mooney

(4) "The problem with the school of hard knocks is that by the time you graduate, you’re punch drunk."
Grocho Marks or Vince Mooney

(5) "If characters really took on a life of their own, there would be a lot more murdered authors".
Agatha Christie or Vince Mooney

(6) "Writing is easy. You just sit down at a typewriter and open a vein.”
Red Simth or Vince Mooney

(7) "I have no problem getting ideas; it’s getting them to behave that’s the trick!"
Lewis Carroll or Vince Mooney

(8) "I’d rather know what to write than write what I know".
Jacqueline Susann or Vince Mooney

(9) "I write comedy because I like being entertained when I work".
Woody Allen Vince Mooney

(10) "Ideas are like stars: they are all pretty much the same until the writer joins them into constellations".
Jack London or Vince Mooney

(11) "Libraries are where they keep the books no one has time to read".
Ogden Nash or Vince Mooney

(12) “The difference between fiction and life? That's easy. Fiction has to make sense."
Tom Clancy or Vince Mooney

(14) "The first six revisions anyone could have written. But the seventh, that's Anatole France.”
Anatole France or Vince Mooney

(15)  "Authors who have nothing to say are usually better at saying it."
Oscar Wilde or Vince Mooney