“The Marshal Meets His Match” Delights with Surprise and Inspiration! -- 5 Stars! 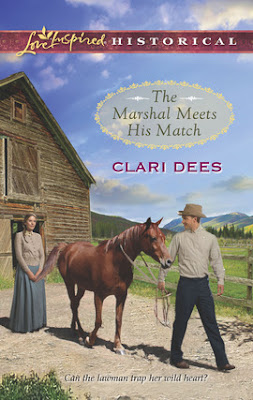 Clari Dees Knocks it out of the
Park with this Debut Romance – 5 Stars!
The Fiesty Heroine is a Story in Herself!
The Marshal Meets His Match

Clari Dees
Love Inspired Historical
On sale date: Jan 1, 2013
“The Marshal Meets His Match” delighted me, surprised me and entertained me! It’s one of those inspired novels that makes you wonder, “Will the author ever write a book this good again?”


Let me tell you why I enjoyed this book so much. When I was teaching I would sometimes tell the writers in the class to make their copy delight the reader. Some students would always look at me like I was a baseball manager who just told a pinch hitter to hit a home run.

The difference, however, is important. The baseball player was going to try and hit a homerun whether he was told to or not. The writer most often is not going to try and delight the reader. Instead the writer is going to try and do the other one hundred and one things required to get the book published. As long as the reader keeps turning the pages, usually by the use of conflict, the editor is happy. So when you find a writer who delights the reader, as Clari Dees does, you have made a wonderful discovery.


It wasn't only the conflict that made me want to turn the pages of “The Marshal Meets His Match”.  I was turning pages to discover what the feisty, unpredictable and loveable heroine was going to do next.


Meri McIsaac, the heroine, is a genuine three-deminsional character. She  is not just a character you know a lot about. She's a character who, like a real human being, has the ability to surprise the reader at any moment. This unpredictability was one reason why I was turning pages as fast as I could. I wanted to see what Meri was going to do next.

Meri is not an easy person. She’s twenty-nine and single with no prospects of marriage. She’s not much interested in men either and she has scared most of the eligible men off long ago. No one really knows what to make of Meri.


“Jonah’s hearty laugh thundered out. ‘She’s a handful, but I’ll take a strong, opinionated female over a silly, pampered flibbertigibbet any day of the week.’”


“A good sergeant never reveals his secrets, Captain. Besides, I have a hunch you’ll figure out how to handle her. Half the fun of courting my Sally was figuring out how to deal with her strong temperament.”


“Miss McIsaac had, by now, probably already arrived back in town, but his hands itched to give her a good shaking— the little scamp.”


“Meri imagined the look on the marshal’s face when he realized she was gone, and grinned.”


The writing is excellent. The author makes skillful use of physical proxies -- using body language to reveal a character’s inner states. This lets the reader ‘feel’ the story as it happens rather than just be told what is happening.
Yet what I like best is the author’s fresh style. It’s as if she went over each sentence and asked herself, ‘is this the ordinary way to write this or can I write it in a fresh or perhaps a witty way?”  If it was ordinary, she freshened it up. This freshness of expression was a major factor in my delight when reading  “The Marshal Meets HisMatch”.

Talk about fresh! You won't encounter the word, "fibbertigibbet" in many books. By the way,  this word is appropriate for the time period. (And yes, I did research it.)
The examples from the book below show both excellent use of physical proxies and the author's original voice:
“Meri caught herself glancing up nervously every time the door rattled, but the longed-for sight of a particular star-toting individual did not appear.”
***
“The minutes dragged by as he gazed unseeingly at the tidy ranch yard, fingers drumming on the arm of the rocker.”
****
“You gonna sit staring into space all day, or do you want to ride in with me?” Jonah laughed at his blink of surprise when he looked up to see the sergeant already mounted.”
****
Heavenly Father, please heal Faither so we can return home and life can get back to normal... without that bossy marshal.

The silent prayer evaporated before she finished, and the peace she’d tasted earlier was nowhere to be found. All the joy she normally experienced when riding her lovely palomino failed to materialize, and even the satisfaction at having outsmarted a certain lawman tasted stale.
***
Now about the hero:
"The loss of his parents had shown him he couldn’t control circumstances around him, only his response, but still, he’d tried to protect himself with a wall around his heart. Then Miss McIsaac had sailed a rangy black horse over his carefully fortified barriers as if they were no more substantial than a cobweb fence.”
If you look at the cover art on "The Marshal Meets His Match", it looks  placid and serene. Forget that! The story is exciting and full of surprises with one of the most memorable heroines you’ll meet all year!
“The Marshal Meets His Match” – One of the Year's Best Books from a Rising Star in the Romance World!
Highest Recommendation!