The Fight of the Century 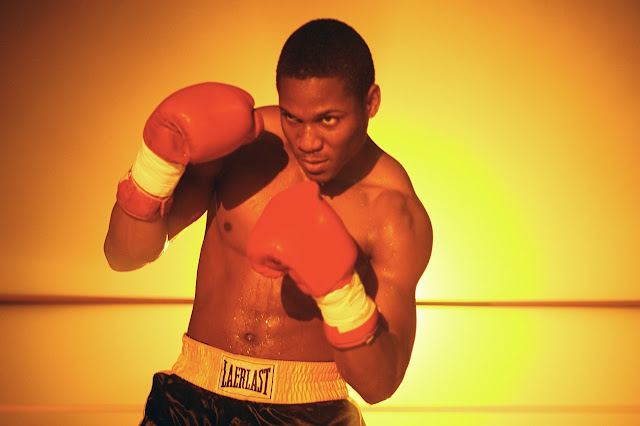 “Welcome fans, this is Eddy Torre along with Merv Swerver, we're here tonight at the Punchinello Arena to bring you the fight of the century!  The undefeated World Champion Sugar Ray Backstory has come out of retirement to put a stop to Insta Killer and to save the Sweet Science.”

“Well, Eddy, I think Sugar Ray has made a mistake. The times have changed. Fans today don’t care about the sport of boxing. I don’t think they even know what the Sweet Science is. They just want to see two fighters come out at the bell throwing punches. They just want instant action.”

“You can say that again, Merv. It’s like today’s fans all suffer from ADD.  All we see today are Insta Killers. The real boxing fans have little choice."

"The establishment just won’t train or schedule classic boxers for matches any longer.”

“It’s the promoters fault, Eddy.  They say boxers are too slow getting started. Boxers like to feel out their opponents. Test for strengths and weaknesses. This can take a round or two or even more but it pays off in the later rounds.”

“It’s sad. All that these so-called boxing fans want to see is action and more action and then even greater action. I think they'd all be happier if we just brought in Roman Gladiators.”

“Don’t doubt for one minute, Merv, that today’s promoters wouldn't bring in Gladiators for fights to the death if it were legal.”

‘So why is Sugar Ray coming back? He knows he’s a dinosaur.  He should know these fight promoters are like lemmings. They are not going to change no matter what. The mob wants Insta Killers, and that’s what they are going to get. After all they vote with their dollars.”

“Sugar Ray is a great man as well as a great fighter. He’s the third great fighter to honor the name of Sugar Ray.  He’d like to save the sport from the Philistines.”

“Doesn’t Sugar Ray know that the smart marketing people have done surveys? Doesn’t he know that 80% of the fans want to see Insta Killer fighters and not classic boxers?”

“Sugar Ray has a marketing degree, too. He knows that the 20% of fans who love the sport and want to see classic boxers buy 80% of the tickets to fights. The 80% of the Insta Killer lovers only buy 20% of the tickets and yet they are the ones the promoters cater to.”

“No, it’s called the concept of  ‘marginality’.  And it’s too powerful for even Sugar Ray Backstory to overcome.”

“Maybe, but that’s what were here to see. Maybe Backstory has a few surprises yet to spring on the brut Insta Killer.”

“We’re off. Just as expected Insta Killer is firing punches like a machine gun.”

“His fists are a blur. Backstory is backing up, bobbing and weaving, using fancy footwork, and making great use of the full ring.”

“Insta Killer is just not connecting.”

“They want a quick kill. And Insta Killer’s just the brut to do it.”

“Backstory's  now on the ropes. He’s got his arms up trying to protect his face and ribs. It’s awful. Sugar Ray is just a punching bag.”

“Backstory has pushed off.  Insta Killer is back peddling.”

“Insta Killer may be tiring. He must have thrown thirty or forty punches.”

“It was a Rope-A-Dope! Backstory wasn’t hurt at all. He knew what he was doing.”

“The fans want both of them in there slugging it out.”

“Intra Killer is just waiting for the bell so he can get his breath back.”

“First round is over, Merv. I'd say the round has to go to Instra Killer. He took the fight to Sugar Ray. He should have that round on points.”

“Round Two and here comes Insta Killer. He’s raised the ante. Look at those fists fly! Sugar Ray is just dancing around. Insta Killer just can’t connect. I think it would only take one punch if Insta Killer could hit him.”

“The fans want Sugar Ray to stand his ground and go toe to toe with Instra Killer.”

“Sugar Ray is a scientific boxer, Eddy. He’s just not going to do that.”

“Third round coming up. Do you think Insta Killer can keep it up? How much engery could the big guy have?”

“Here’s comes Insta Killer. Look at those punches. How many can one man throw in a single fight?”

“The crowd's not happy. They want a slug fest not a boxing match.”

"Merv, I think this crowd would rather watch a street fight."

“Sugar Ray’s hit him! Insta Killer dropped his right and Sugar Ray stung him in jaw.”

“The fans like that. That’s the loudest yelling yet.”

“They're not the same fans who were booing. They're the true boxing fans having their say at last. Remember the true fans fill 80% of the seats.”

“Do you think they should stop the fight?  Insta Killer doesn’t have anything left. He’s just a one trick pony.”

“Well, Insta Killer is no boxer. He doesn’t know what to do. He’s hit again and again.”

“Stop the fight!  Instra Killer is just helpless. Sugar Ray can hit him at will. The Killer is down.”

“Insta Killer is not going to get up. It’s over!”

“Fans, we have Sugar Ray here with us. Ray, you don’t even look like you’ve broken out in sweat yet.”

“I’m in shape. I also know how to box. These Insta Killer clones are boring. All they know is action. They just flail away! That’s their plan and when that gets boring they just up the ante and flail away even faster.”

“So do you think this victory will help your cause? Do you think we’ll see more classic boxers in the future?”

“You mean boxers who come out slow and apply their science and feel out their opponents to the joy of the true boxing fans?”

“Yes. Will the promoters go back to scheduling boxers instead of Insta Killers?”

“No, the promoters won’t change. If it takes Insta Killers to fill those last 20% of the seats, then Insta Killers are all we are going to see being booked for matches.”

“So the promoters are just going to take the true boxing fans, who buy 80% of the tickets, for granted.”

“Of course they are. They’re promoters. That's what they do. That’s what they have always done. The marketing battles are always fought on the margins. It’s the same in politics.  The battle is always for the voters on the margin and not the loyal party members.”

“If the situation is hopeless, why did you come out of retirement?”

“I’m starting an association of Indie promoters. We’re going to bypass the big promoters and put on our own fights. These will be the fights that the loyal boxing fans really want to see but are not getting right now. We are going to let the big promoters have their margianl 20%.”

“Then what about your plans? What about the last 20% of the seats? Can your Indies be profitable without them?”

“We'll have lower costs and smaller venues. This will provide much larger paydays for the fighters. Beside, we have me!  I flit like a butterfly and sting like a bee! We are going to take this sport back and make it the Sweet Science again. And, believe me guys,  I’ve got the Sugar to do it.”

“That’s it fans. This is not good news for the big fight promoters.”

“Well, there’s always the Gladiators, Merv. Maybe the big promoters can get fights to the death legalized.”

“We better learn a new vocabulary then, Eddy.”